Jaii.Reynolds: What’s going on? Things are going pretty good right now. How about you?

LGBT.U: All is bless fam, I’m glad i finally get to do this interview with you, So can you give us a quick introduction of yourself for our readers?

Jaii.Reynolds: Sure, No problem. I’m Jaii (pronounced Jay), I’m a R&B singer/songwriter from Saint Louis, MO, but recently re-located to Orlando, FL. I’m 23 but because if my baby face everyone always thinks I’m way younger. Lol

LGBT.U: So what’s been happening with you & the music at the moment?

Jaii.Reynolds: Like I previously stated I relocated to Orlando to pursue my degree in Recording Arts. I’ve been performing all over Florida & hope to expand to some new cities in the near future. I’m also working on an EP entitled “2 Be Blunt.” As well as a (not yet titled) mixtape.

LGBT.U: How would you describe your music and what inspires you to create the type of music you make?

Jaii.Reynolds: I would describe my music as real & fun. I take inspiration from life itself. Whatever I’m going through at the time you’ll be able to tell through my music, which makes it real. I’ve also taken a lot of inspiration from the scene here in Florida. It’s mostly trap music & I love the beats, they make you dance. So I’ve been inspired to create a mixtape with some of the hottest trap beats just being my goofy ole self, which makes my music fun.

LGBT.U: What do you enjoy the most, writing, recording or performing?

Jaii.Reynolds: I LOVE PERFORMING! The energy you get from being on stage & getting positive feedback from all the hard work you put into writing & recording is just amazing to me. It’s definitely a thrill.

LGBT.U: What are your views about some people thinking & saying there is a ‘Gay Agenda’ going on?

Jaii.Reynolds: When people don’t understand something they have to put a name or label on it. Since the LGBT Community is becoming more accepted with each passing day, more people are becoming comfortable with just being themselves & showing who they truly are to the world. Which make it seem like a fad because it’s so much so fast. I just think people need to focus on more important issues like these Gun Laws, bullying, & homeless LGBT teens. Amongst many other things…

Jaii.Reynolds: I think it’s extremely important. Sites such as LGBT Underground give artist a platform to grow & not just be “local” artist. I’ve come across some amazing music that I normally would have no clue about if it weren’t for this site.

LGBT.U: Are there any plans for any Collaboration with Other LGBT Artists anytime soon or do you know of any LGBT artists to listen out for?

Jaii.Reynolds: “K.E.L” & I always make great music together & you can definitely expect more from us. There’s an artist by the name of “E.Bandit” that I have great musical chemistry with. Also be on the look out for a fellow singer/songwriter by the name of “Yoana Rae”. She has an amazing voice.

With the production of my EP I would love to work with Jimmii Montana, Temper, Kin4Life, & KhaosDaRapper. Tyra B & Siya are on my collab list hopefully we can do work at some point in my career as well. Oh! I think a collab w/ Bry’Nt would be soooo dope as well.

LGBT.U: When people check out your music what has the response been like so far?

Jaii.Reynolds: The response has been so overwhelming with such positivity. I never would’ve thought I would reach so many people & get nothing but good feedback. It’s really a blessing.

LGBT.U: What do you think of the Music Scene Right Now as a whole?

Jaii.Reynolds: As a whole the music scene is definitely changing into something great. You have singers on the XXL Freshman List, which is a HUGE deal to me. There’s so much variety because people are making the music that they want to make, not what the industry & the labels want them to make. It’s a beautiful thing… 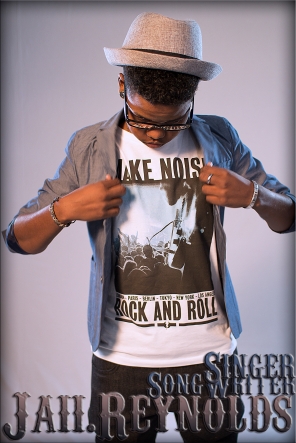 Now granted a lot of what’s played on the radio sounds the same at times, but that just comes from people seeing something that works & going with it instead of doing something different & making it work.

But the underground scene is so dope, full of creativity & unique sounds people have created for themselves.

LGBT.U: How hard is it to make it in this industry as a (Female) Artist?

Jaii.Reynolds: As a woman period people tend not to take you seriously. As a female artist my music is based on emotion so at times people see those emotions & translates that into me being weak, when in reality I’m anything but. Female artist have to MAKE people see your greatness, where as a male artist people already expect it.

LGBT.U: What sets you apart from other artists?

Jaii.Reynolds: Honestly I’m an individual, which automatically sets me apart. But if you want a straightforward answer, I’m very modest, I’m not about the “All In Your Face” Flashy approach. Anyone who knows me knows I’m extremely humble.

LGBT.U: If you weren’t making music what do you think you would be doing with you life right now?

Jaii.Reynolds: I’d probably be a chef. Better yet a food critique. I love to eat. No Pun. Lol!

LGBT.U: How important do you think it is for new artist’s to know their history and appreciate the different elements of music?

Jaii.Reynolds: I think it’s extremely important. We wouldn’t be where we are musically if it wasn’t for those who broke records before us. It’s crucial to pay homage to those who paved the way. Folk music led to the creation of Country. Which led to Blues, to Gospel & Jazz, to Pop & R&B, to Hip Hop. You have to appreciate all genres & elements of music because with out one there wouldn’t be the other. Every genre has inspired another genre to be created you know?

LGBT.U: What advise would you give other up & Coming Artists?

Jaii.Reynolds: Just do you. Stay true to you. Make the music that you want to make, make what feels good to your soul. Love your music because if you don’t how do you expect someone else to? 😉

LGBT.U: Any final words / shutouts before we finish?

Jaii.Reynolds: I want to give the BIGGEST s/o to my mom & popz (& I always will) without them I might not have been the artist I am today. I also want to give a s/o to my manager Syncere & the Jayne Doe crew & my Heart For Music family. Also I want to say Thank You to any & everyone who has supported me & liked my music thus far. Without y’all I wouldn’t even be doing this interview. Lbvs.